You will find many restaurants in Mahābalipuram, vegetarian and non-vegetarian and also western-style cooking at the “Nautilus”, run by a Frenchman who has been living in India for a very long time, and at the “Au Yogi” run by a former Indian yoga student, married to a Belgian. There is also “The Blue Elephant” et le well known “Moonrakers”, run by our friend Ramesh, and “The Gecko Café” held by Mani in a nice place with a view on the lake, 14 Othavadai Cross Street. For a kitchen dining room, very cheap: The « Mamalla », S. Mada Street, near the Bus Stand and the « Sri Ananda Bhavan », on the corner of E. Raja Street and Othavadai Street. 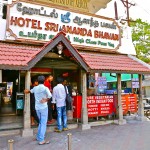 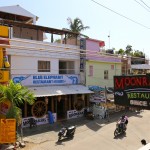 If you are invited to eat with an Indian family, you will be greeted with the “Namaskar” (Namaste in the North), the welcome made with both hands together. In India you never wish happiness to someone, it is considered to be in your hands and depends only on you. For a meal you generally bring your host sweets or fruit. You do not say thank you in Indian languages but you can say “Shukrya” (to say thank you in Sanskrit you say “dhanyavaad” or “shukrya” which means “thanks and be prosperious”).

In the large international restaurants, your cutlery will consist of a spoon, fork and knife while in more modest restaurants you are likely to have only a spoon for the semi-liquid dishes. You eat with your fingers of your right hand in India and only with them as those on your left hand are considered impure. In the North you may take the food with your whole hand, but in the South it is considered more polite to use only the end of your fingers. Bread or pancakes are used to help you eat.

In many restaurants in India, the cold chain is not necessarily respected. Fridges or freezers are often turned off to save money, so avoid eating food that has been frozen.

In the temples, saffron powder, blessed water from the Ganges, and sometimes blessed food are offered to visitors as a sign of “Prasad”, blessing of the Gods. It is considered impolite to refuse such gifts.

The types of food served in the North differ significantly from those served in the South. Southern cuisine is quite different from the northern culinary habits in that it is much more vegetarian in most of the hotels, with the exception of the international hotel chains. On the other hand, you will more often find fish either grilled or in sauces, in the South.

Southern cooking is generally spicier than that of the North. For those with sensitive palates, you can ask the cook to reduce the spices (“No chilli, please”).

During the meal, our Indian friends drink water or “lassi” which is a diluted dahi (yoghurt), salty or sweet, sometimes with a taste of rose water.

You will often find local beer in the restaurants. Tea and coffee are almost always drunk outside mealtimes in the morning or afternoon, and are served with milk (reminder: alcohol is not sold in the general stores in Tamil Nadu, but only in specialised stores). 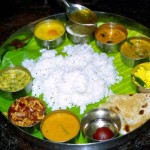 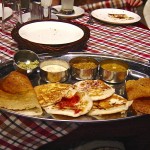 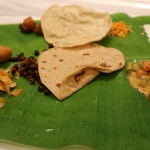 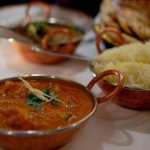 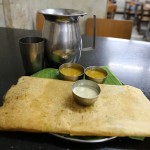 Dishes that you must discover for a heavenly tasting experience …