The Pūjā is a festive ritual supposed to cause the descent (archāvatara) of a deity into an image representing the deity or into a symbol such as the lingam.

The course of the ceremony of the invocation of pūjari (the person officiating),

The prayer begins with the ringing of a bell, calling the deity. It continues with offerings of fresh flowers, of food, incense, accompanied by music and the recital of mantra(s). If it takes the form of a statue or a lingam, it is anointed (coated) with oil, camphor, and sandalwood paste and covered with garlands. 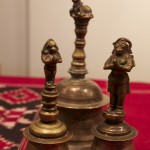 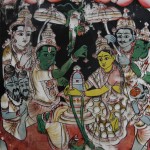 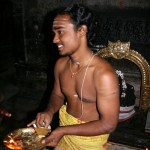 The liṅgam or liṅga is washed with milk and sacred water such as that from the Ganges. The liquid poured on  spreads into the yoni (sacred place). It is, then anointed with ghī (घी), with sandalwood paste and decorated with flowers. The high point of the ritual is the moment where divinity is revealed to all. The Brahmins celebrate the Pūjā in temples. In private homes, it is the Head of the household who assures its celebration.

The Pūjā plays an essential role In Hindu society, it is a central and daily act of Hinduism.  Depending on the requested Pūjā, there is an official price to settle with the person officiating. The “Pūjā” occupies an important place among the daily rituals not only of the Hindu world but also that of the Jains, Buddhists, and even Christians in India.. 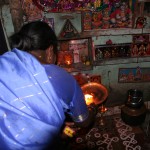 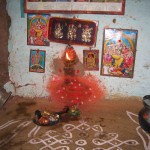 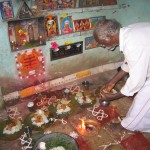 Are normally indoors in the Pūjā room, when there is one, or, when the House is too small, outside near the front door.

When the Pūjā is performed in a temple, there are two possibilities, either you yourself perform it or you ask the help of a Brahmin priest called pūjari (the officiating person) to present the offerings to God

A ritual in Indian life

In the Hindu tradition, temples and homes all have their altars before which the priest, the family, the friends’ family come to their “Pūjā” in honour of the Gods and divinities.  The Pūjā is a rite of worship of Aryan origin, which has replaced the Yajna (यज्ञ), the Vedic sacrifice.

The altar before which the ceremony takes place includes one or more statues, one or more images that represent the God or goddess of the place.  If, as is the case most often, the Pūjā ceremonies are performed in the family home or temple, they can also be performed in the street, at a crossroads, or at the foot of a sage called “guru” वसंत.

If in the multitude
we unrelentingly pursue the One,
it is to return with the blessing
and the revelation of the One
confirming itself over and over again.
Śrī Aurobindo