Andros is part of the Cyclades archipelago. It is a vast, fertile and mountainous island. Rare in the Greek islands, it has many sources and torrents. Some valleys are therefore very green. The trails of the island allow ballads among vineyards and fruit trees. The architecture is also very different from other islands: large neoclassical houses with roofs covered with tiles. Andros is untouched by mass tourism. It mainly attracts wealthy Athenians.

Andros is a paradise for nature lovers and hikers. A well-developed network of trails takes you through the island.

Our Sophia Dimitri very hospitable hosts, will offer you numerous possibilities for excursions.

The village of Chora, the beaches on the west coast, the monastery of Agios Nikolaos and of Panachrantou. 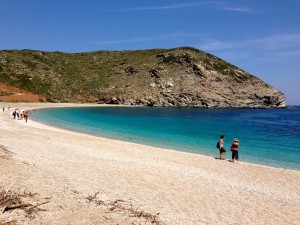 The sand is pleasant, the sea is transparent and fairly quiet. Swimming is enjoyable, but at Easter, water can be a little bit chilly!

Indulge yourself to the benefits of the practice of Ashtanga Yoga, to the blue of the Aegean Sea, to hiking, to osteopathic consultations, to massages, to meetings with other yoga practitioners, to resting, to reading, to swimming or simply stay on the beach doing nothing!

Preheat the oven to 180 C. Heat half of the oil in a frying pan and cook the aubergine slices until browned. Place them in a baking dish. Combine the tamari, lemon juice, water and ginger and pour over the aubergine slices. Bake in the oven for 10 minutes. Turn the slices over and bake for another 10 minutes until most of the liquid has been absorbed.

Place the quinoa in a pan with double its volume of water, bring to the boil and simmer for 15 minutes until tender. Put the remaining oil in a frying pan and sauté the red pepper and courgettes until soft. Add the quinoa, mix well and spoon over the aubergines. Bake in the oven for 10 minutes. Garnish with the parsley springs and serve hot.

Cut a thin slice off the top of each tomato to make a lid and reserve. Scoop out the pulp of the tomato using a spoon chop the tomato pulp in small pieces and set aside. Leave a 1/2-inch shell of the empty tomatoes. Place the tomato shells in a baking dish and sprinkle the insides of the tomatoes with some brown sugar and salt.

Cut a thin slice of the top of each green and red pepper to make a lid. Reserve the lids, discard the seeds and place the empty peppers in the baking dish.

Heat 4 tablespoons of olive oil in a large deep frying pan or casserole add the chopped onion and sauté for a few minutes. Add the pine kernels and sauté until lightly browned. Add the grated carrots, courgettes and chopped red peppers and raisings and sauté for a few minutes. Add the tomato pulp rice and 2 cups of water. Add 2 teaspoons of brown sugar, salt, pepper and ground coriander to taste and cook for 10 to 15 minutes. Remove the casserole from the heat and add all the fresh herbs (parsley, basil and mint) and stir well.

Jean Claude, dig the foundations of the Matrimandir, Auroville, India

After coming back from India where Jean Claude taught Yoga to Vinobha Bhave and to Indira Gandhi at Paunar Ashram, dig with a Peruvian friend the beginning of the foundations of the Matrimondir in Auroville

Success is immediate, there are several classes everyday in different places, at Mt St Aignan University, at St Claire’s church etc. …. Jean Claude transmits either Iyengar’s technique or Pattabhi Jois’s technique. The workshops take place at the “Château d’Ernement sur Buchy”, where he was living.

Still in Rouen, in 1974, he founds the C.R.Y. (Centre Rouennais de Yoga) with   Dr. Louis Creyx, 264 students follow the morning or evening classes.

He then founds the “Centre Padma” in Elbeuf in 1979 to host residential training workshops. Many workshops are held in France, Italy, Switzerland, Holland etc. …. Since then, Jean Claude exclusively teaches “Yoga Korunta” (Ashtanga Yoga as transmitted by Sri K. Pattabhi Jois) .

Many seminar take place, in the South of France, in the Community of the Ark, founded by Lanza Del Vasto.

Life changes ……. Jean Claude meets Anne and goes to live in Brussels in 1987. He teaches at the “Maison Américaine”, chaussée de Charleroi, then rue des Glaïeuls, Uccle, in 1988. More space becoming necessary, the Ashtanga Yoga Institute moves to rue Jules Lejeune, Ixelles from 1989 until 2003. Finally, with the help of his friend an architect Simon de Wrangel, the Ashtanga Yoga Institute moves into it’s own premises 610 Chaussée d’Alsemberg in Uccle, with a yoga room that follows the explanations given by Sri K. Pattabhi Jois.

“The ideal Yoga room must be well ventilated. Do not open all the windows, only those on a same side that are situated high up. The floor must be perfectly flat, the room very clean, on the ground floor (not above nor below because it is not good for the breathing), in a quiet place, far from the surrounding noise and far from people involved in an activity other than yoga.”

The Ashtanga Yoga Institute’s reputation spreads; daily lessons, workshops and seminars are given in Belgium, Greece on the Island of Andros and in Athens,and in India in Mahabalipuram.

The Ashtanga Yoga Institute’s aim is to transmit “Yoga Korunta” (better known as Ashtanga Yoga) as it was taught by Shri K. Pattabhi Jois during his life-time, at the « Ashtanga Yoga Resarch Institute » in Mysore (South India).

Today, a lovely team participates in the evolution of the Institute. Below is what is offered :

In a large pot put some water, salt and olive oil and bring to the boil. Cook the pasta until it’s ‘all dente’. Drain the pasta and reserve half a cup of the pasta water.

While the pasta is being cooked put 1 teaspoon of olive oil in a pan and slightly sauté the garlic, chilli and pine kernels and then move them in a large bowl. Add the lime juice, avocado cut into cubes, basil and parsley and mix well. Add the reserved pasta water and 4 tablespoons of olive oil and mix well. Stir in the pasta and add some salt and fresh pepper.

You can serve with some grated parmesan or nutritional yeast flakes for a vegan version of the dish.

Place the pre-soaked chick peas in a pan and cover with fresh water. Add 1 tablespoon of the olive oil and some salt. Bring to the boil, half cover and simmer for about 1 hour until tender. Drain and set aside.

Heat the remaining oil in a heavy frying pan. Add the spices, peppers and tomatoes and sauté until the vegetables are tender. Add the chick peas, mix well and cook together for about 5 minutes. Season with salt and pepper and serve hot.

Ingredient for a person :

Place all ingredients in a blender, mixer 1 minute.
If too strong, add a little water or vegetable milk
Decorate with almonds.