I was born in Germany in 1969 and came to live in Belgium in 1997, in order to work as a conference interpreter – and to discover what was going to become my passion, yoga.

In 1999 I came across an approach called yogadance, which, in search of sensation and in an effort to find proper body alignment, links together various postures in a playful creative way in order to create a choreography.

Later I tried different kinds of yoga, and in 2011 I discovered ashtanga yoga, which I found fascinating to the point that in 2012 I decided to enrol in the yoga teacher training course given by Jean-Claude, to learn more about ashtanga on a deeper level.

I believe that ashtanga is a very good tool to know oneself and to be honest with oneself: whereas verbal language can be used to deceive (oneself), the body never lies, through blockage, pain, but also through the joy of living it expresses during yoga practice and beyond.

My basic training is physical education. Injured and very handicapped by the intensive practice of different sports, I discovered Ashtanga Yoga through a friend and again found the pleasure of living. I have now been teaching it for more than 25 years. It is happiness in the awakening of the consciousness of the body and the regain of mobility.

A part from giving replacement courses at Ashtanga Yoga Institute in Brussels, Bernadette has her own organisation:

Sergine has been a professional dancer at the 20th Century Ballet of M. Béjart, Ballet des Flandres, Choreographic Theater of Rennes, Ballet of Nancy, Scapino Ballet, Bonn Ballet and Tanit Dance Theater. Meanwhile, she has always been a passionate photographer.

After a workshop in China with Guy Le Querrec from the MAGNUM Photos Agency, she naturally decided to become a professional photo reporter and contemporary dance photographer.

Several works such as “The Fall of the Berlin Wall 1989-1999- 2009”, “The Life of the Gypsies in Alentejo”, Tibet with “Losar feasts in Labrang”,” Acupuncture for all”, “In the heart of Tibetan Buddhism”, Jazz with “Corps Accords”, …  lead to various exhibitions and publications.

As a passionate dancer, she continues to photograph live performances, and especially Michèle Noiret’s work for about 30 years. This intimate collaboration will lead to the edition of “Territoires intimes – Michèle Noiret – La danse-cinéma” (ed. Alternatives théâtrales) in March 2009.

“Thanks to her passion for dance, Sergine Laloux photographs the art of movement and composition, without pathos nor voyeurism, with a particular sense of frames and forms.” Jean-Marie Wynants, Le Soir.

Sergine discovered Ashtanga Yoga in 1998. Since 2000, she practices with Jean-Claude Garnier, who’ll teach her to become a professional Yogi Master.

Sergine followed a 4-years full program at the Ashtanga Yoga Institute of Brussels.

In January 2016, she joined a 3-weeks intensive program on Therapeutic Yoga with Barath Shetty in Mysore.

In August 2016, she did the Teacher Training – Ashtanga 2nd series of 100 hours at the Ashtanga Yoga Center of Encinitas, California with Tim Miller.

In 2017, she joined him for a workshop in Berlin and a retreat in Italy.

She also received training in the use of Yoga Wall and she gives individual lessons.

In her multiple lives as a dancer, photographer and now Yoga teacher, transmission has always been part of her concerns and her thoughts towards pedagogy.

The Ashtanga Yoga Institute in Brussels perpetuates the teachings of Sri K. Pattabhi Jois. Since 1973, Jean Claude Garnier trains students, in Europe and Asia, to deepen their knowledge about Yoga. Some of the students will find a calling and become a Yoga Professor and in turn, transmit the art of Yoga.

The Institute is open to different currents of Yoga. Jean Claude Garnier pursues the transmission of Ashtanga Yoga as taught by Krishnamacharya and his disciples B.K.S. Iyengar, and Sri K. Pattabhi Jois.

Training and recycling as a Yoga professor, who is concerned ?

How does the training with personal monitoring take place ?

How to obtain a diploma

The Yoga teacher training consists of a set of modules.

At the end of each module there is a practical and theoretical evaluation.

Once you have successfully passed a module, you can move on to the next one.

You need to complete a minimum of 5 modules (A, B, C, D, E, F) and write a thesis which summarizes your studies and research on one of the aspects of Yoga.

This diploma is a requisite to : 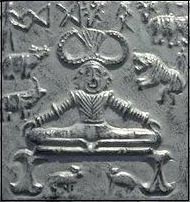 Proto Shiva, of the Indus civilization

To enrol in the first year of training you must: