The temple of Kapaleeswarar in Mylapore, from the Pallava era (8th century), was rebuilt by the Vijayanagara kings. The tower at the entrance of the temple or “Gopura” was erected in accordance with the architectural features of the Dravidian style: a pyramidal portico decorated with polychrome statues drawn from the Hindu mythology.

It refers to the story when Shiva got angry because of the disrespectful behaviour of Brahma towards his daughter Sarasvati, and cut off one of his five heads (cf. Matsyara-Purâna III, 32 and Bhâvagata-Purâna III). 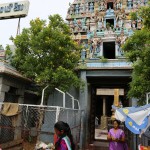 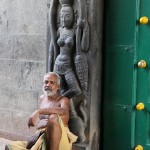 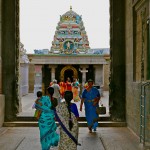 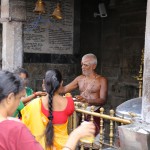 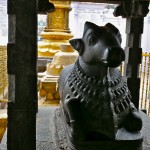 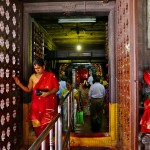 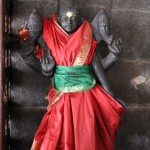 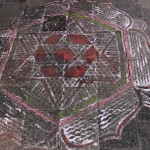 Among the magnificent bronze sculptures are the 63 shivaist Saints, named Nayanmars.

It is worth noting under an old tree, Punnai, the sanctuary devoted to the goddess Parvathi in the form of a peacock, venerating Shiva. The name of Mylapore originated from this legend. “Mayil” which in Tamil means peacock and “ore” town.

Next to the temple, offerings (garlands of flowers, coconuts, incense and perfumes are on sale. 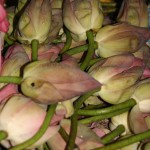 The religious festival of Arubathumoovar takes place every year in March-April at Mylapore. It lasts several days. There is a procession of a statue of Shiva around a sacred pool, mounted on a huge char (12 meters high), called Ratha, drawn by about a hundred Indian pilgrims in ecstasy.