In India everything has a divine origin. Music comes from the Gods. Brahma, the creator, has also created the universe, the world, with the primeval sound, the song ‘Ôm’.

There is even a celestial orchestra, consisting of musicians: the ghandarvas.

Indian music is very diverse but can be divided into two broad types, one designed for expression to the divine in the temples, the other for the pleasure of the King and Princes and for popular entertainment.

With time and geopolitical changes (invasions) classical music has divided into two kinds, the so-called Southern “carnatic” music is integrated with dance, while the so-called Northern ‘Hindustani’ music brings together Muslim and Mughal influences.

Carnatic musical instruments include the Vina (stringed instrument, called Saraswati vina or Viña carnatic) and mridangam (long two-ended drum), accompanied by the “tambura” (called tanpura in the North), which produces a harmonic drone throughout (now replaced by an electrical appliance, alas !). 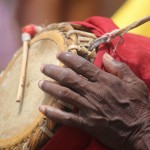 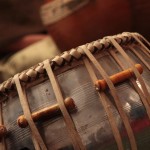 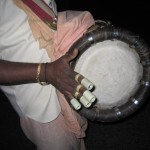 Indian classical music is based on rhythmic mathematical principles. It is on these rhythmic structures that the musician will be able to improvise as he wills. Classical music has no partition (but there are very strict rules, you do not play just any which way). The raga defines the melodic framework for the played piece. Each raga is associated with a feeling, a season, a time of day (dawn, dusk, etc.).

In the modern era, the most common popular music comes from Bollywood-type movies, tirelessly broadcast on TV and radio channels and even on mobile phones.  It is a romantic, eclectic music that incorporates, in addition to Indian orchestrations, Western influences, Greek, African, jazz, South American etc. Indian pop has enjoyed growing success in recent years. It represents more than 30% of the television channel MTV-India.

There are in India as many folk music types as there are languages… and musical instruments, often made by the musician himself. 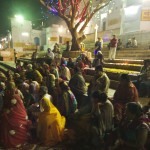 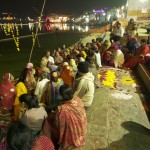 Bhajan (sometimes called kirtan) means any type of devotional singing, most often in the form of a sung prayer in honour of a deity.

The gawwali are of Sufi origin, from the North of India in the 14th century. These are songs, of two groups: hamd or manqabat devotional songs dedicated to Allah.

The ghazal are the songs of love dedicated to women in the Muslim tradition, from Persia, sometimes with mystical resonance. They have only one verse and are sometimes sung in syncopated rhythm. They are found throughout the Muslim world. In India, they have been translated into Urdu.

The Bâuls, the madmen of God…

The Bâuls (fools in Bengali) refer to groups of nomadic musicians who roam Bengal and the North of India, singing religious songs and begging for their livelihood. They follow a similar philosophy to that of the poet and philosopher Kabîr. The Bâuls have influenced the poetry of Rabindranath Tagore. It was not so long ago that there was no TV or radio, and the only means of cultural dissemination was through itinerant musicians and players such as the Bâuls. For millennia, they have been the means of transmitting knowledge to all layers of society.

To deepen your knowledge: